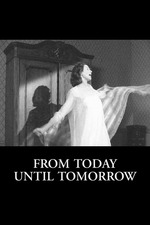 There's nothing I can say about this movie that Neil hasn't already covered yet I'm almost in shock at what Huillet and Straub have accomplished here. Calling their ouevre difficult is an understatement, of all the directors in the "auteurist sphere" there is not a single one who consistent makes films as textually dense and inherently difficult to comprehend as S/H. This isn't to say they're bad by any means. While my personal tastes drift towards the brilliant duality in Too Early, Too Late which juxtaposes fluid camerawork and static images forming a parable about historical events and From The Clouds To The Resistance's lush visual metaphors in their richest work cross cutting between languages, myths and the history of the world, this for me is my new favourite of theirs and the first movie where their appeal finally clicked.

Straub/Huillet films typically are composed of similar compositions. Characters remain still while reciting dialogue with as little emotion as possible (Even Bresson never achieved such monotone performances). The camera avoids the usual shot/reverse shots to show characters in lines, often flipping between close ups at the camera so even though they are looking at us, we know they are not looking each other. This for me at least has made their work near impeachable with a complete lack of visual movement but by transposing this framing into an opera style, they are playing to all their strengths. The first shot shows their intentions clearly, the camera roams around a set preparing for a performance. The orchestra performs, the lights turn on, The back window on the set's reflection pushes forward like a jail cell as its image stretches forward. A row of empty sets stretches on forever as we become the audience (very similar to the opening of Certified Copy) A single piece of graffiti asking Where Does Your Hidden Smile Lie (the title of Pedro Costa's documentary about the directors editing Sicilia!) is the most confrontational shot in Straub/Huillet's entire ouevre, presenting an audience with questions rather than answers. The play begins.

What interests me the most is this all happens in the first 5 minutes. The actual opera goes on for the rest of it's hour long runtime yet I almost don't care about anything that happens in it given that this setup is such a refreshing amount of honesty from a notoriously difficult pair of directors I'd probably like it regardless. It helps that the rest of the movie displays their traits as their most brectian. Rarely have movies ever been more aware of themselves and the audience that's watching them. The brilliant choices of lighting and performances wouldn't look out of place for a 1930s production, lines delivered in a tambre that Demy would be proud of, a story of mistrust and an analysis of social dynamics worthy of Stroheim's best combined with the best use of human shadows since M.