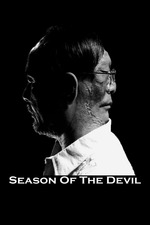 One of my larger criticisms about Diaz’s body of work has been how his personal judgments as a historian clash with his responsibilities as a director. Most of his films serve as recreations of Filipino culture but they rarely reference that their HIS interpretations and whatever reinventions he attempts in his work for better or worse distort the reality of the events they portray. Singling Diaz out for this may be unfair when this a trait showed by many of his contemporaries (think how Costa talks about Fontainhas in his tetraology or Wang Bing’s documentaries) but for a director who is very outspoken about portraying a culture so rarely referenced in wider film circles he’s rarely referenced how his own standing as an established ‘arthouse’ director starting with Evolution Of A Flipino Family has caused his countries standing to be partly coloured by the environments depicted in his oeuvre.

Diaz addressing this criticism before the film even starts is why the opening of Season Of The Devil was such a welcome surprise to me. Along with his trademark static mid-shots and a very welcome coloured hue to the black and white photography that provides a warmer temperature to his shots, an admission is narrated to the viewer which is the closest Diaz has ever come to directly addressing his audience as his sympathies for the innocent victims and friends he lost in the war are made very clear. This admission of subjectivity in his work triggers the film’s 4 hour metronome. Characters speak to each other in song whether they want to or not. Celebrations of Flipino culture; past, present and future have the same cadence as a communist at gunpoint forced to keep the tempo of the imperialist’s fascist call to arms. It serves as a way for Diaz to keep the audience on their toes as a fiction is weaved around a central beat.

The obvious comparison to make with this film is Jacques Demy’s Umbrellas of Cherbourg. This is partly because it’s the ONLY non-adaptation that’s dialogue is recitative throughout (along with A Room in Town) but also Diaz places the arrogance of its central characters above the surroundings their trapped in. Where Demy used the Algerian war as a wedge between two star crossed lovers, Diaz has the CHDF’s (think of a Filipino version of ICE) forces shunt their way through the established conventions and seize control of the narrative. This aligns Diaz’s knowledge of history as a fascist tool, one which he’s never fully in control of (scenes establishing a communion early on don’t work for me in the way the rest of the film does) but does realise the implications it has later. A theme emerges from this about the failings of democracy shown through the equal weight everyone’s words are given (including the ones who want everyone dead!) and given the political climate this couldn’t be more relevant, with Diaz pointing his finger at anyone who thinks a democracy can ever be grounds for a harmonic acapella utopia.

As the Pied Piper’s melody carries the film, the community splits into close ups of its people. An audition is carried out to the viewer of the melancholy of each character before settling on Hugo as the character most qualified to be an audience cipher before his is maimed and mutilated by the fragmented memories of Diaz’s teachings. A woman wistfully looks back on the past as an imperfect, but stable time, lamenting what the future may hold (played by Diaz’s usual muse Hazel Oreinco in a very reflexive role) as she sees Hugo in herself and his eventual destruction at the end. A man whose literally two faced condemns Hugo (the viewer) to live in exile at an abandoned school representing the unlearning of history as he’s turned into a wanted man. Rather than recreating history like his previous films do, Diaz destroys it, turning a figurative burning I mentioned in Lullaby To A Sorrowful Mystery into a literal one in the same way Tarkovsky did in his swan song.

This film is a gambit, and for Diaz it paid off. It’s already getting the same cavalcade of awards that he’s been receiving since Norte but here these trinkets have greater meaning as a sense of Unlearning hypnotizes the masses. I don’t think this is Diaz’s best film (Lullaby’s mysterious secrets continue to unravel themselves two years on) but with this 4 hour testament he’s never been more relevant.