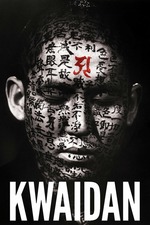 Quite possibly the best anthology film that I have ever had the pleasure of watching. I can’t recall a single other anthology film where each part feels so fleshed out and perfectly balanced. None of the stories were too short. None of the stories overstayed their welcome. All four told a perfectly confined story and each had a legitimate impact with each segment managing to mix Japanese folklore and horror brilliantly.

Kwaidan has to be one of the most gorgeous Japanese films I've seen. The production design is just brilliant, capturing both the natural beauty of Japan and the cheesy character of its studio production work. The sets are something amazing to behold, and the costumes are enjoyable to look at, as dumb as that probably sounds. Kwaidan uses color and lighting in ways that look modern in 2020. Kobayashi is so damn ahead of his time.

The score is minimal yet brilliant. When it wants to create tension it hums in the background or grows steadily, almost as if it's psychologically messing with the viewer’s head. This makes the few moments of genuine horror that much more impactful. Kwaidan is much more of a folktale anthology with horror trappings than it is straight-up horror. It gives the film a lot more space to breathe and tell stories which Kobayashi takes advantage of.

Kwaidan is pretty much everything I love about Japanese cinema all wrapped into one box. It’s got a genius creative design to the physical aspect of the film, it's shot beautifully, the stories it tells have meaning and purpose and above all, it's very memorable. Masaki Kobayashi, I fucking love your films. I can’t get enough of this shit. It gets me every damn time. Kwaidan is my type of film.