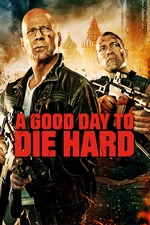 UPDATE: After the recent news regarding Willis' aphasia, I apologise if this review come off as harsh in hindsight.

Oh how I was dreading revisiting this one, and what a surprise, it's STILL a piece of shit!

But of course, you can blame Fox for that, who as if they wanted to deliver the death blow to the Die Hard series, brought in hack director John Moore to handle this fifth entry (because everyone loved his take on Max Payne didn't they)? And when you're also paired with an equally poor screenwriter like Skip Woods, it's no wonder that A Good Day to Die Hard ends up being the franchise's dumpster-fire.

Still working for the NYPD, John McClane travels to Russia after learning that his estranged son Jack may be in potential trouble. Jack (Jai Courtney), who is working undercover for the CIA for some reason, is transferring one Yuri Komarov, who planned to blow the whistle on a nuclear weapons heist involving the government, I think? Anyway, that is of course until McClane shows up and joins him in the fight to keep Komarov safe...or something. And there's also stuff about Chernobyl, Jack attempting to assassinate someone...and a bunch of other bullshit that barely matters.

Having McClane go international for once could have been interesting. It's just a shame that the script is total dogshit, monotonously plodding through it's overly-contrived narrative while failing to give you any reason to care about anything or anyone. The unenthusiastic performance from Willis hardly helps matters either, who is more or less phoning it in as McClane this time around. With a look that screams "let's get this over with", he completely sleepwalks his way through from beginning to end and not even the odd wisecrack (usually related to being "on vacation") or utterance of "yippee-ki-kay" can redeem it.

And then we meet John's son Jack, and man do I hate this insufferable little twat. Whiny, uncharismatic, and disrespectful right from the moment he points a gun towards his own father's head, it says a lot when you're rooting for him to be killed more than the actual bad guys, who might I add are ALSO trash. In the past, Die Hard villains were defined by their charismatic personalities and brilliant plans. Now? We get horribly generic and stereotypically evil Russians with ill-defined motivations and beyond comical anti-American sentiment ("You know what I hate about you Americans? EVERYTHING!").

Even the action is utter shite, and you can thank Moore for that. Do I really need any examples? How about that stupid truck chase that has practically NO continuity whatsoever? Or the fact that John and Jack are miraculously able to survive stupid feats like mile-high window jumps (with conveniently placed scaffolding to break their fall)? At this point, McClane has been transformed from a vulnerable everyman into a bulletproof one-man-army, so there's essentially no tension involved. Not to mention the hideous visual "style", with its ugly grey colour palette that's a complete eyesore and incoherently filmed action with shaky-cam and jump cuts out the arse.

Are there any positives? Well, I'd say that the fact that it's under 2 hours long (unlike the rest of the series) means it's mercifully short, and seeing Mary Elizabeth Winstead make a small return as Lucy is also nice, even though she deserves better than this. Otherwise, this dreck would barely pass as a DTV actioner lying in some discount bin, but as a Die Hard movie it's downright insulting, almost like they took some unused script for a Steven Seagal romp and shoehorned John McClane into it.

And of course, no future entries in the series have followed (don't get any ideas, Disney), Moore has barely made any films since, and Willis has now been reduced to starring in low-grade VOD trash. I don't think anyone in the right mind would say this film had a positive effect on their careers whatsoever, despite the fact that it made money.

For franchise completionists only, and even then I wisely caution against it. Pathetic and worthless.