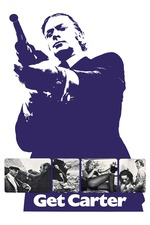 A true British crime-classic. Michael Caine has never been better, starring as a London-based gangster named Jack Carter, who returns to his home in Newcastle upon news of his brother's death. The circumstances surrounding his passing however seem oddly suspicious, and he sets off on a vengeful journey to find out those responsible for the REAL cause of death, even if he has to go though every local mob boss or acquaintance.

One thing I have to give credit for is that this film definitely doesn't pull any punches. It represents a time in cinema when filmmakers were much less PC. It's unapologetically violent and nihilistic all the way through, with a rather discomforting attitude towards women, but still with a good amount of dark humour. Carter is far from a sympathetic character, he may seem stern and emotionless most of the time, but his wrath kicks in full force once he learns the truth (his rampage of revenge leaving behind a sizeable amount of bodies).

There are no heroes here. Nearly every character (including Jack) has some deplorable trait to them, and in a way that makes it feel more authentic. What I really like though is it's use of 60s/70s Newcastle, with dodgy terrance houses, large industrial mills and pubs (complete with a man with six fingers on his hand). It's a very depressing but appropriate setting, complete with an accompanying Roy Budd score that consists of psychedelic swing and jazz themes (all of which fit nicely with the post-mod setting and overall bleak tone).

All in all, some fantastic music, great performances (from Caine especially) and hard-hitting brutality make this one worth tracking down. Insanely quotable, raw, and gritty, I feel it's as good as British gangster films from the period get.