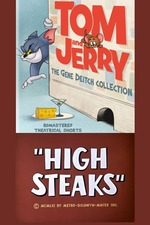 Four shorts in with the Deitch era and still no sign of improvement, but you can probably guess that already.

In the backyard, Jerry notices Tom eyeing the tasty barbeque that his owner is cooking, and as a result decides to step in to get a bite of it himself. Tom obviously attempts to prevent this, with Jerry violently retaliating accordingly. Since this constantly ends up disturbing his owner's barbeque, this results in Tom being on the receiving end of some rather nasty (and disturbing) abuse.

So despite the animation not looking quite as janky this time around, the usual Deitch flaws rear their ugly head. The audio mixing is still poor, often not syncing up properly with the on-screen movements, and the goofs are extremely noticeable, like the proportion of Tom changing size in various shots (appearing about the size of a cola bottle at one point) and disappearing under what is clearly transparent water.

And if you thought Tom's horrible piece of crap owner was bad in Down and Outing, he's really upped his sadism here, literally burning Tom's head with a hot girdle and forcing a shaken cola bottle down his throat. What a real nice guy. Probably not much more worse than what Jerry has put Tom through in the past, but I think it's *kind* of a different story when a human is doing it instead of a mouse.

Once more, it's a decent set-up, but the execution is a different story entirely. Boring and laugh-free at best, unnecessarily mean-spirited at worse. Not great.