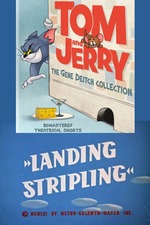 Huh? What was that? After one that was moderately tolerable, we're followed by what is probably one of the worst Deitch efforts yet, in my view.

Basically an interior version of The Flying Cat, Tom is in the garden when he finds his sleep interrupted by a yellow bird, who lands on his chest for some reason. As Tom reacts negatively and begins to go after the bird, Jerry steps in to help as he and the bird team up to terrorise Tom together. After which, Tom tries various ways to fight back, including trying to make himself fly.

Everything here seems to happen at such a rapid and choppy pace that it's barely possible to tell what is really going on. Suffice to also say that the audio design has somehow reached a new low with this one, and where do I start? The bird flying noise literally sounds like somebody farting, and the electric pole falling down sounds like burping. Not to mention the horrible vocal effects that Tom makes (like his scream) and Jerry's annoying high-pitched laugh.

Even more so than other Deitch shorts, watching this quite the baffling experience from start to finish. It was almost like a lesson on how NOT to structure a good cartoon. Not even the occasional decent gag idea (like one involving a hose pipe) can really save this one, and the ending with the plane made absolutely no sense.

Yeah, it's pretty bad. So much that it genuinely caused my laptop to crash while watching it. Take that as you will.