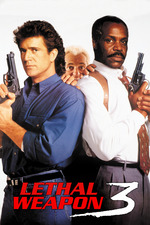 The dynamic duo of Riggs and Murtaugh return for another adventure, and by this point you can feel the Lethal Weapon formula wearing a bit thin, despite Richard Donner's best efforts to keep things fresh. The complete absence of any story input from Shane Black doesn't really help either.

After stupidly attempting to disarm a bomb and knocking a whole building down, LAPD detectives Martin Riggs and Roger Murtaugh (who is a week away from retirement) are demoted to patrol as punishment. After foiling an armored car theft, the two stumble upon an arms-trafficking plot run by former LAPD lieutenant Jack Travis. As Riggs and Murtaugh are returned to their original positions, they do their usual stuff to try and take down the ring, with the help of Leo Getz (now a real-estate agent) and fellow officer Lorna Cole.

By this point, the series has pretty much become a straight-up comedy, which I guess isn't a terrible thing. However, when the humor misses, it does so pretty hard. The fat security woman who lusts after Murtaugh is eye-rolling and annoying, and I honestly don't know how you go from Riggs almost blowing his brains out in the original, to stupidly making dog faces here to tame some angry doberman. And if you hated Joe Pesci's Leo Getz character in the last one, this role here certainly isn't going to change your mind.

As far as Gibson and Glover go, their chemistry and banter keeps this one watchable, despite Murtaugh's horribly irritating "RIGGS!" yells. As far as the new additions to the cast go, I've also always quite liked Rene Russo's Lorna Cole character, who makes for a fine, ass-kissing female companion to Riggs. Jack Travis is also kind of a weak villain, lacking the mean streak that past bad guys in the series had, though I admit burying a dude alive in concrete is pretty vicious.

Of course by now you can also expect larger-than-life action, and this one delivers to an extent. Donner has quite the penchant for blowing shit up (like in the opening scene), and some of the sequences, from the highway motorcycle chase to the fire-drenched climax at a housing site, are a good deal of fun. Nothing wholly original, but it keeps the film exciting amongst the rather middling and formulaistic narrative. Kamen's music score is still solid as well, though that overbearing sax is starting to get REALLY tiresome.

Compared to its predecessors, it falls pretty short, suffering from a less compelling narrative (which seems to have too many story threads crammed in) and too much humor in place of grit. Aside from that, I'd say it's an acceptable enough effort otherwise. If you've enjoyed the antics of these two before, I don't see why you should here. Fun, but forgettable.