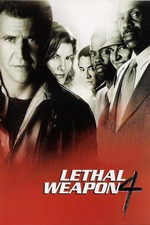 So the Lethal Weapon series finally comes to it's fourth and final entry, and by now you can imagine that the formula has been pretty much exhausted, and you'd probably be right even. As much as I can remember enjoying this one in the past, I can confidently say it is the weak link of the series, even with Richard Donner directing once again (though still no Shane Black, sadly).

A fair bit has happened since the last time we saw detectives Martin Riggs and Roger Murtaugh. Riggs has hooked up with Lorna Cole and is having a baby, and Murtaugh is going to be a grandfather. Despite their lives on the up, the duo is faced with their toughest case yet, as they stumble upon the existence of a smuggling ring run by a group of Chinatown Traids, consisting of "Uncle" Benny Chan and Wah Sing Ku (Jet Li in his US film debut). As per usual, Riggs and Murtaugh aim to take down the ring, along with the help of Leo Getz and rookie detective Lee Butters (Chris Rock).

If there's anything that makes me appreciate the simplicity of the original, it's watching this one. By now, it feels like everything has transformed into a sitcom, where forced outbursts of humor is the norm and there's just way too many characters at once. Getz has reached his peak as an unwanted annoyance, whose obnoxiousness is only rivaled by that of new addition Butters, despite Rock's occasionally funny attempts to ham it up. The still strong partnership of Murtaugh and Riggs (who has now shaved his mullet) keeps it watchable, though only so much.

As far as Li's villain goes, he isn't given much to do rather than look intimidating but the actions of him and his gang (like torching Murtaugh's house) do restore a bit of grit to the series, even if it's at odds with the comedic tone. The action still remains a high spot as well thankfully. The freeway chase is a lot of fun and I quite like the brutality of the final confrontation, but really it's all been done before and better. Not to mention that the reused sax/guitar-laden score from past entries feels horribly dated circa 1998, despite some nice Oriental-inspired touches in places.

Overall, it definitely shows signs of a series that's past its expiry date. However, it's still enjoyable in parts thanks to it's set-pieces, and the ending marks quite a charming send-off to the franchise's characters. It kind of makes you respect the fact that Gibson, Glover and Donner stuck together though all four entries. A decent enough final entry, if not an overstuffed and fairly unremarkable one.

And now it's being said that a fifth one is being made, with Gibson directing. Could it work? Probably, though I get the feeling that Danny Glover well and truly is too old for this shit, and Gibson as well.