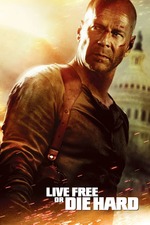 I know my take of this will be quite a hot one, but I've always dug this divisive fourth installment of the Die Hard franchise, which came over a full decade after With a Vengeance. Bringing the old-school John McClane into the computer age could have been a complete disaster, but I'd say Die Hard 4.0 (which is a far better title than Live Free or Die Hard) does a better job of it than would have been expected.

This time, Detective John McClane hasn't exactly reached a new high since the events of the last film. He's become completely divorced from Holly, and has a rocky relationship with his daughter Lucy (Mary Elizabeth Winstead). As if things couldn't look worse, he is faced with a new threat, that is deadlier, smarter and more reliant on technology. A group of cyber-terrorists led by the disgruntled Thomas Gabriel are planning to carry out a complete financial shutdown of the United States, forcing McClane back into action as he escorts a young hacker by the name of Matt Farrell (Justin Long).

By now, it's more than obvious that we're a long way from the simplicity of the original, in which a premise of an ordinary everyman trying to save a group hostages has been replaced with a contrived narrative involving cyber-hackers attempting a nationwide shut-down. Thankfully, this is before the phase when Willis completely stopped giving a fuck, so McClane still feels somewhat like himself. Despite losing his hair and having become more cynical, he still retains his sarcastic, wisecracking personality, with the added trait of feeling completely out-of-touch with modern technology.

I've also always liked how this one established Lucy more, and how putting her in danger makes McClane's conflict with Gabriel much more personal. Matt on the other hand isn't close to being the best sidekick in the series, but he proves himself very useful when McClane is faced with more tech-savvy situations. Timothy Olyphant was also an inspired casting choice for the role of Gabriel, but unfortunately his character isn't well fleshed-out enough to nearly match the impact of past Die Hard villians, in spite of Olyphant's best efforts.

Len Wiseman's glossy, ultra-slick handling of the action meanwhile can't match the raw and grittier impact of the original trilogy, but it's still fun. We get some old-school Die Hard sensibilities intact, with some claustrophobic location use (e.g the elevator) and McClane dispatching his enemies in brutal fashion (along with Marco Beltrami providing some nice renditions on Michael Kamen's iconic themes). At the the same time however, things have been turned up to pretty ridiculous heights. McClane has survived some pretty incredible feats in the past, but here we've kind of gone past the point of believability, the utterly silly fighter-jet chase being the best example of this.

I don't know if I could truly call it a good Die Hard movie, but I'm a sucker for good popcorn action flicks and this one just about passes the grade in that aspect, even if it's a far-cry from the original. In spite of it's overblown action and a disappointing lack of connection to previous entries (aside from some subtle continuity nods), it's a respectable enough modern take on the formula for me.

Besides, compared to what follows, this thing's a masterpiece.