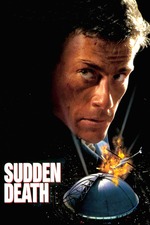 I saw this one some time back but never got a chance to review it. Teaming up with Peter Hyams a second time, this is pretty much Jean Claude Van Damme's very own Die Hard clone that other action stars were getting at the time (Stallone in Cliffhanger, Seagal in Under Siege e.g). As far as 'Die Hard on a X' movies go, I can't say this is one of my favorites, but there's plenty of enjoyment to be had from the over-the-top nature of it all.

Van Damme is Darren McCord, a Pittsburgh police officer still suffering guilt from a girl he failed to rescue when he was a firefighter. A championship hockey game is taking place, and McCord is given the task of being fire marshal while watching over his two kids. Predictably, a gang of terrorists (sound familiar?) led by disgruntled ex-CIA operative Joshua Foss take over and hold the U.S vice president (along with various other VIPs) hostage in the stadium suite with the intent of blowing up the stadium in exchange for ransom money.

Foss is a pretty damn good villain, Powers Boothe portrays the character as a total sadist and control-freak who has no second thoughts about violently executing people or holding children hostage. McCord's daughter Emily even becomes at risk, and in the end he is forced to put a stop to Foss's plans and rescue her from his reign of terror. Van Damme may not be a great actor (at least not as an English speaker), but he's pretty damn lethal in disposing of villainous mooks.

There's some good fight scenes at hand, the part where he fight a goon dressed in a mascot penguin costume is hilarious. A lot of the villains are killed in creatively violent ways such as getting crushed in dishwashers to being torched alive with water pistols. Even with it's heavily violent and mean-spirited nature at hand, it has a pretty playful and self-aware nature to it. In actioners as ridiculous as this, it's better for them not to take themselves so seriously.

As much as I enjoyed Sudden Death however, I was left feeling like I wanted more from it. In the end though, it's harmless action fare that entertains, and probably is one of Van Damme's best movies. Take it for what it is and you should be satisfied.