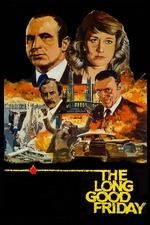 I felt in the mood for a Bob Hoskins double bill (preceding Mona Lisa) so I thought I'd give this one another go. The Long Good Friday is known as a British gangster classic, and I'd say it deserves that title pretty damn well. I've seen this one before but I never got around to talking about it, funnily enough. Thankfully, it holds up just as well the second time, if not more so.

Harold Shand is a well-connected London gangster who seems to have everything going for him when he's about to settle a re-development deal with the mafia from across the pond. That is until the arrival of Good Friday, when a series of murders of close friends and attacks on his businesses force him into a state of paranoia. Driven by revenge, he attempts to identify and wipe out the culprits responsible as the carnage piles up. Could there be a rat in his circle or this all the work of an outside organisation?

Again, one of the main things that sells this film (to me at least) is Hoskins. He was an actor taken way too soon, as he shows in his performance as Shand. What initially comes off as a calm and well-meaning businessman soon takes a nasty turn as Hoskins unleashes a level of ruthlessness and anger that few would be able to pull off. Can you honestly imagine the line "The mafia, I've shit 'em! being pulled off by anyone else? Because I certainly can't. While Shand is far from a sympathetic lead (he is a violent Cockney gangster after all), but the story is executed in a manner that keeps you on-edge throughout.

While the narrative begins in a somewhat confusing manner (opening with a series of dealings and deaths regarding seemingly unrelated characters), things begin to fall into place as the clues pointing to Shand's enemies become more apparent. John Mackenzie shoots in a manner that captures the gritty side of London very nicely, while the plot seems to derive from the fear at the time of organisations like the IRA and the damage they were capable of inflicting. Also, while I feel the synth-driven score doesn't always fit the tone as much as it should, you can't deny that Francis Monkman's theme is simply brilliant.

Next to films like Get Carter or something from the likes of Guy Richie (, this is a worthwhile starting point for those wanting to get into British crime cinema. It’s one of the more unapologetically violent and un-PC films of its type, but still manages to provide a compelling narrative that keeps you engaged throughout. Definitely one I wouldn't pass up.

Also look out for a young Pierce Brosnan as a silent cold-blooded IRA hitman. Not exactly the kind of debut role you'd expect 007 to make.