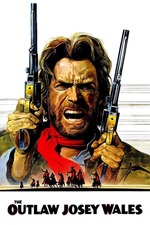 A classic civil war-based western starring and directed by Clint Eastwood. I don't consider myself a huge western buff, but Outlaw Josey Wales is probably one of my favorites of the genre, and one of Eastwood's best outside the Dollars trilogy.

He plays a Missouri farmer quickly driven to vengeance after his family are brutally killed by a group of Union soldiers, later finding himself on the run from bounty hunters after an attack on a Union squad after joining a pro-Confederate Bushwhackers. "An army of one" holds true as Wales proves to be a fearless and highly trained gunslinger taking out anyone pursuing his way, eventually meeting elderly Cherokee Lone Watie who assists him on his journey across the frontier.

Eastwood's portrayal of Wales is defined by his constant spitting of tobacco and his skilled gunplay that make him a memorable western anti-hero. The late great John Vernon also has a role as Fletcher, the Confederate colonel forced into pursuing Wales at the order of Union forces. The movie is filled to the brim with chaotic shootouts and beautiful western landscapes. While it is not without violence, it's hardly graphic or explicit.

With a good cast of colorful secondary characters, explosive western action scenes, good music by Jerry Fielding (who also composed The Wild Bunch) and an anti-war message, this is a recommended western in my books.