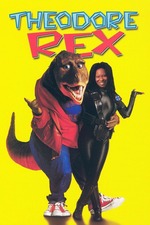 You know things aren't gonna go well when the very first opening crawl reads 'Once upon a time in the future...', and it only goes downhill from there.

So this is a thing that exists. Unfortunately so, but where do you even begin with something like this? Released straight to video in 1995 (but sadly released theatrically outside the States), I understand that this "thing" cost about $30 million to make, but after seeing this it's difficult to see where most of that went, aside from the advanced dino suits and likely paying cast members to stay on board.

Honestly though, who in the right mind would think this is a good idea? Theodore Rex takes place in some bizarre urban dystopia in the future where humans and anthropomorphic dinosaurs co-exist, as a result of reanimation by some scientist. And so we are introduced to the titular character Theodore Rex (frequently called "Teddy" throughout), a dinosaur police detective who after the murder of a dinosaur (or a "dinocide", how clever) is paired with detective Katie Coltraine to solve the case, stumbling upon some plot to create a new ice age or whatever, who really gives a shit?

Even with it's retarded premise, the film really doesn't do much with it other than showing off some pretty well-made but creepy looking dinosaur costumes that flap their mouths up and down to terrible voice acting. The action and story falls completely flat as does the humor, that mostly consists of fart jokes and Teddy knocking things over with his tail (try taking a shot every time that happens, believe me it won't end well). There appears to be like three key villains but it's hard to tell whose the main one. Acting wise, Whoopi barely gives a f*ck, which is hardly surprising considering the producers threatened her with a lawsuit when she tried to bail out.

So in the end, who was it made for? It's far too boring for kids, and far too idiotic for adults, there's literally nothing this film does right. It may be good for some unintentional comedy value at best, but really it's just painful to sit through. The fact that so much money went into this and so little came out of it is angering in itself. This is not one to watch sober.