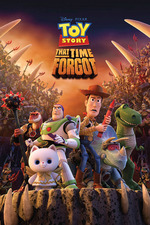 Merry Christmas to everyone on LB.

So it's Christmas Day, and I've got nothing else to do, so why not binge watch some festive-themed material in the process? In this Toy Story Christmas special, Bonnie takes Woody, Buzz and the gang to her friend Mason's house for a post-Christmas play date.

Exploring their surroundings, the gang find themselves in the midst of a stronghold controlled by a line of dinosaur action-figures known as "Battlesaurs", who have never been played with and as a result are hugely delusional (much like Buzz was in the original film). Finally getting a chance to live out as a true dinosaur, Trixie takes the oppurtunity to fight in an arena battle, but when Woody and Buzz end up in the middle of the battle, she has to put her skills to proper use in order to save them.

As is the usual standard for Pixar, much of the same high-quality production values from the main entires are intact here. Detailed animation, great voice-acting and an amusing, quirky sense of humour. I like how this one gave Rex and Trixie a little more to do than usual, and the designs of the Battlesaurs are well-inspired, especially that of The Cleric who heavily resembles Skeksis from The Dark Crystal (which I'm guessing was the intention).

Much like Toy Story of Terror!, this standalone special doesn't offer a whole lot new to the series lore, but is otherwise a enjoyable enough little time-killer that should please die-hard fans of the series.

I think I may have even liked this special a little better out of the two.