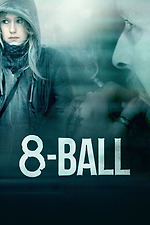 I wasn't previously familiar with the works of Aku Louhimies, but after seeing all his awards it was clear winner to be a first movie from Göteborg 2013 that i've seen.

"8-Ball" is not an original material and maybe that's what makes it so good. Most of the time when you watch an adaptation of some novel you've read you can't get away of feeling that they left out something from the book that made it great. In this case i haven't read a novel prior to watching a movie...

...And it felt great, this is complex, multi-layered crime drama with great script, acting, directing and cinematography. Characters getting their sympathy and understanding. Maybe something was left out, but who cares, it's good as it is. Please not that it is not a festival movie, it's a normal mainstream crime movie, that you'll be involved while watching and not bored at all! No, it's not something new or revolutionary as "Girl With Dragon Tattoo", there's no perverts, but I hope this one will be bought in other countries outside Finland, just because it can.

The Resurrection of a Bastard