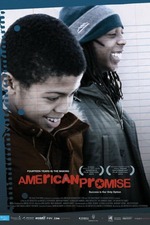 Simply WOW! One of the best documentaries ever. Very interestingly done, i could only bow before those filmmakers, who spent more than 13 years filming this documentary about friendship and scholarship of two black kids. And what it led to.

I honestly thought that there's no racial tensions this day in States, but it isn't so. But it's not the main theme in the movie. It's so interesting that there's even no dramatic fiction feature in cinemas near you, that you can compare to this one.

A Good Day to Die Hard