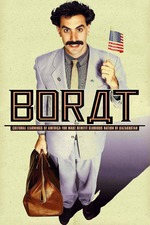 Few films have had the pop culture impact of Borat: Cultural Learnings of America for Make Benefit Glorious Nation of Kazakhstan, this infinitely quotable work of nonfiction comedy. More than that, it manages to succeed while flawlessly mimicking a fluff news piece style, and utilizing some of the crudest humour imaginable; in fact, those are two of its biggest strengths! I fully believed I watched this years ago but hadn’t. I must have just seen highlighted clips for the MTV movie awards in 2007? Anyway, it’s nuts that this worked so well with so many audiences!

Beyond the schlock and baudy body humour, there is a free-form sense of total liberty to this movie. Borat can get away with saying such heinous things because he happily makes himself the butt of the joke, and he weaponizes that perception against the most hateful and nationalistic. He makes them look incalculably worse! In crafting this silly, ridiculous surface story, he exposes American disregard of foreign countries, of tribalism and selfishness, with just total ease.

Have a Good Trip: Adventures in Psychedelics