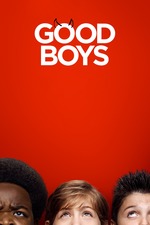 Entertaining and does a lot well, and has more actual jokes than relying more on “hey, isn’t it hilarious these preteens are saying fuck?”, but really strip that away and it’s another cliche coming of age comedy where the kids wanna be with the cool crowd and one wants the girl of their dreams. Not even me being a Booksmart bitch, not my fault that movie was a lot more unique for the genre than this, and did so much more with the emotion and humor than this movie wanted to. The way the heart of the movie is injected in is well done in the ending, but throughout the movie it just feels awkward, almost as if it’s something in the movie’s back pocket to pull out when the plot demands it. The jokes are actually really funny at times, other times not so much but unlike a lot of other comedies I’ve seen recently, I was never really groaning at how much a joke failed, so there’s that I guess?

Despite this, the kids in question have solid enough chemistry to where I bought them as friends, and the last heartfelt moment was definitely earned and the message it had on friendships and how much they last was admirable and done in a smart way where the emotion felt there. This plus some laughs and other things I liked about it made it one I had fun and was entertained watching, but didn’t necessarily left an impression on me.