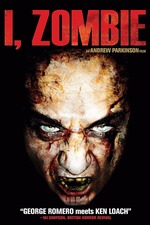 It seems that zombie movies are dime a dozen and offer little in the way of originality and imagination so it is always refreshing to see a zombie flick that attempts to bring new ideas into the exhausted sub-genre. Today, I am going to talk about a film that I seen three years ago and still haunts me to this day. I was bored and weary and I decided to watch, what I thought was your typical low-budget flawed zombie flick - how wrong I was. It is anything but your typical zombie flick - it is atypical.

The narrative is about this young PHD student Mark, who seemed to have everything going for him: a wonderful girlfriend, friends and a promising career. That all comes to a tragic end when one day, Mark, is out on a field trip in the wilderness when he finds a sickly young woman who appears to have some degenerative disease. He decides to help the young woman when she bites him - he runs off and collapses on the way home. He wakes to not understand what has happened to him. He suddenly has this uncontrollable urge to eat human flesh. He realizes that he is not the same so he rents an apartment and shuts himself away from the outside world including his girlfriend who he misses greatly. He begins to lose his biological functions and starts to decay. He comes to the conclusion that his hunger for human flesh won't stop, even tho he tries to fight the overwhelming urge, at first, he succumbs to it. It has taken over his life and makes it impossible to interact with people - he becomes withdrawn and lonely, while he recalls his old life that he so longs for.

It's a highly original take on the zombie genre, it focuses more on the world through the eyes of a zombie. It is likely the most realistic zombie movie you will ever see. Effectively, an existential horror that provides a thought-provoking and sad depiction into the mind of a man destined to a sad, lonely and horrific existence. At just 79 minutes, it seems to run for two hours, but it is never boring. I guess, after watching it you will feel depressed, but ultimately thankful for being healthy and alive. At just 630 votes - it is terribly unappreciated, that is a shame.