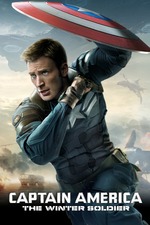 THE ROAD TO INFINITY WAR

I don’t have a lot to say about this. For me, it’s pretty straight forward.

The action scene in the beginning was okay. However, the film’s action progressively gets better after that. This has arguably some of the best fight scenes of any MCU film.
While the plot is interesting, I never felt like I was so wrapped up in what is one of the greatest comic book films ever.
Chris Evans is still boring to me. He’s not bad, but bland at times. I want to make this clear, it’s not the character. I love the character Captain America, I just wish Evans would put a little more into playing him.
Scarlett Johansson was fine. They try to give her some layers, but it doesn’t really work out. Sebastian Stan was also really good…for the time he actually got to so emotion. I understand that his memory has been erased and all, but holy shit most of the time he seems like a robot. Sebastian Stan isn’t a bad actor and his portrayal of this character has gotten better in Captain America: Civil War. But in this it feels like he’s just meant to be there, so he can fight Cap and then it’s revealed that “oh no he’s his friend that died”. I don’t know what it is, but the execution just felt off for me.
Also, for a big film, it felt like there were times where The Russo brothers didn’t really know how to take up a full screen. I’m no film expert nor have I had experience in making films (one day maybe), but I’ve listened and watched many different people who talk about the importance of taking up the entire screen. Even if no one is in a shot. It just seemed like they didn’t know what they wanted for some of the visuals. Fuck, I don’t know. It’s the Russo Brother’s first superhero film and it’s the second Captain America film, I’ll let it slide.

This is an exciting film. There’s enough action, adventure, and good storytelling to entertain anyone who watches. I was entertained by it. I can’t believe they got Robert Redford to be in it.
The music is actually very well done, but it’s covered up by excessive voice over.
I hope you all don’t think that I’m hating on Cap for the hell of it. I enjoy this character a lot and I think he does a great job kicking ass and representing freedom. I’ll go more in detail with Civil War next time.

Serge The liked these reviews

Serge The is using Letterboxd to share film reviews and lists with friends. Join here.