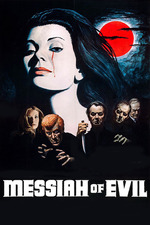 Film #28 on my terrifying journey through Hooptober V.

A deliciously Lovecraftian tale with striking kills, and palpable atmosphere. I adore the pure strangeness of this film, which both excels and suffers from excessive ambiguity, likely due to the apparently unfinished nature of the project, having been pieced together from footage from a differently titled film that had its funding pulled before completion. Evidence from this also shows in some of the sloppier editing. Still, it captures moments of total beauty and captivates with its mystery. A B movie of admirable style and ambition.