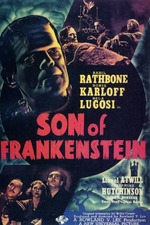 Much like The Bride of Frankenstein, this will most likely increase to a 4/5 after a couple of days thought, as this was quite a fantastical conclusion to Boris Karloff’s trilogy of playing the Monster, even more so considering the departure of James Whale as director and the unfortunate passing of Colin Clive. However I think Rowland V. Lee and Basil Rathbone made up for it quite well in their own way.

While Rathbone doesn’t nearly show the steep descent into insanity as well as Clive does in the 1931 original, he still covers a lot of the things that the previous character did well, especially a fitting conclusion to their haunted name. As for V. Lee taking over the directorial role, he still managed to make a coherent and enjoyable story, it was just lacking slightly with its cinematography and set design that the other films strive in.

The addition of Bela Lugosi as Ygor was a nice one and his motives were well-explained and understood, but his character undoes a lot of the incredible development that was made to the Monster in The Bride of Frankenstein, especially his speech. I suppose his “death” reset him and now he was merely a tool for Ygor’s use, but it makes him seem far more like a killing machine rather than the confused innocent soul that was so wonderfully developed in the previous two.

Still a pretty great film overall, with its 99-minute runtime (the longest of the 30 films) never feeling overbearing or detrimental, instead it was rather very fitting and it gives the film enough time to fully establish the new Frankenstein family. My only main problem was the child actor who made me sigh and groan every time he opened his stupid little mouth. But to give credit where credit is due, that scene where he first talks about meeting the “giant” was the most chilling one in the entire film.