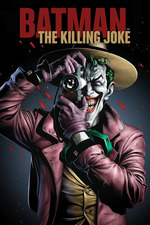 I don't really read a lot of comic books outside of Deadpool, and I've seen next to none of the countless animated Batman movies that are out there, so maybe this doesn't make me the most qualified person to critique this film. But, I could easily tell what parts were added on by the writers and director, and what parts were actually taken from the source material; and when I can tell that so easily, that's really a bad sign. It's not just because I heard that they added a whole prologue about Barbara Gordon and her relationship with Batman. It was the fact that the parts that I knew came directly from the book were so fantastic that I was enraged when the added segments were so horribly done. Almost everyone I've seen talk about the Barbara/Batman relationship being added on has been vehemently against the addition, whereas I had hoped that it would have brought some interesting character depth to the story. Instead, we get about 30 minutes (that's almost half the movie, mind you) of some of the most cringeworthy relationship development I've seen in a comic book movie. It completely derails the Joker-Batman relationship that I had assumed this original story was all about, and instead chooses to focus on what is basically a creepy fan fiction from the depths of tumblr and deviantart.

I say that I can tell what parts weren't in the original novel because the Joker's plan is one of the most brilliant and diabolical schemes I've ever seen him commit in a Batman story. It feels so layered and tense in its planning and execution, and the brutality of it all is almost as good as I can imagine it was in the graphic novel. Some of the animation is great, much more fluid than I remember the older cartoons of the 90's being. The action feels more human and vibrant, less choppily hand-drawn than classic superhero cartoons were. It complemented the action scenes nicely, and it makes me intrigued to watch more modern superhero cartoon films in the near future. It's just a shame that such a thrilling and intriguing story was hampered by a terrible romantic subplot that makes me want to die knowing it exists. I don't want to say that it ruins the entire film, because there are plenty of parts that are just fantastic (probably thanks to its source material), but there was simply too much that was clearly added on for it to really be a satisfying adaptation.

This film had everything. It had Kevin Conroy. Tara Strong. Mark Hamill. It had all the bearings of what makes a Batman cartoon so great and popular. But Barbara is given too much time in the spotlight, dragging down a deliciously diabolical plot. Maybe the directors wanted to give Batman more motivation for his fight with the Joker, but it added next to nothing to the characters' developments like I had hoped it would. I wanted to be able to prove comic book nerds' fears about the relationship amplification to be for naught, but instead I was sorely disappointed myself. Maybe this story would benefit from a live action rendition, but being a short graphic novel, I can't imagine there being a lot anyone could add without it being offensive to fans of the original novel. This would have worked far better as a TV special- it would've been shorter and cut down to remove the out of the blue relationship aspect while maintaining the endlessly fascinating Joker backstory. I don't blame Alan Moore for distancing himself from adaptations of his material, despite loving a few of them myself. This is just a waste of time that honestly made me want to track down the original comic to read for myself. I'm sure it's far more thrilling than this version could ever be.