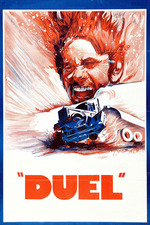 Steven Spielberg's directorial debut is, surprisingly, one of his best films. Based on a short story, this made for TV film actually got a limited theatrical release when it was made as well, and has recently hit blu-ray, and I must say that the transfer is stunning. Being a TV movie, the film is actually changed from its original 1.33:1 aspect ratio to the modern 1.85:1 ratio, making it look more like a natural modern television program for modern widescreen TVs. The HD quality really makes the film look even more like a natural TV movie, and I loved the "soap opera effect" that the high frame rate my TV gave off produced.

Dennis Weaver's psychologically fascinating role as David Mann reminded me so much of his nervous Motel Night Manager role in Welles's masterpiece Touch of Evil. The way Weaver manages to transfer that character from the film into this one and make it something deeper and completely different really shows that the former film was much more influential than many may realize. Without Weaver's incredible performance, Duel would be nowhere near the masterpiece it is today, and without Touch of Evil, Weaver wouldn't have had a character to stem from. SO, if one thinks about it, Steven Spielberg can actually accredit Orson Welles to helping launch his career. Okay maybe that's a little far-fetched. Maybe I'm reading too deep. But it's still an interesting thought, right?

Welles or no Welles, Duel is an astounding psychological thriller that is so enigmatic that it leaves almost the entire plot up to interpretation. Yes, we all know that a truck driver is chasing this man, but why? Who is it? Perhaps Spielberg only meant for this film to be a horror film, with most of the horror stemming from the fear of the unknown. Being relentlessly pursued by a veiled driver of a three ton truck with no discernible motivation against you could really rack your nerves, after all.

I actually had a somewhat crazy theory that the events of this film are all inside David's head, like a tense, intricate psychological thriller. But this falls to pieces when two different characters witness the destructive eighteen wheeler, and seem to acknowledge its presence. Maybe it was just the driver who was crazy, or even demon possessed. That would make for an interesting origin story. (No, Hollywood, I was being facetious.)

Although it isn't necessarily Steven Spielberg's greatest film, Duel is a tense, thrilling psychological film that never manages to keep low on suspense. The tension is kicked into high gear, and the acting is really superb for a television film. It really just goes to show how talented Spielberg really is. If his first film made for TV with such a lot budget can be something as good as this, imagine how people felt back then about his future. The possibilities were limitless, and now we have one of the greatest storytellers in cinematic history. A true auteur with a most excellent freshman feature.