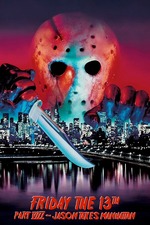 Four parts after The Final Chapter, the terror of Camp Crystal Lake breaks out of his cage to terrorize teens across the river in Jason Takes Manhattan, a fun-filled slasher sequel that does its best to break the conventions that the last installments had set up and maintained while retaining the necessary bits as well. You still have the virgin, the horny teen couple, the douchebag stepfather, and a slew of other conventional character types that are needed for this type of horror film. But Jason Takes Manhattan puts its first half in a much more condensed space, constricting its cast in a claustrophobic setting that maximizes the dread and tension that oozes out of these films, however cheesy the plot can become.

I have to admire this sequel for trying to expand its horizons to a more original setting. Instead of staying inside cabins like the audience is accustomed to, we are thrown into a tumultuous seafaring adventure, piling up bodies faster than Charles Manson and creating an unnerving aura of urgency. The kill scene in the dance room in particular felt supremely done, sweeping the viewer into an adrenaline-laced emotion of impending doom with driving rock as its background.

Last night, I watched a short 4D experience of Friday the 13th (it was the remake) that exclusively showed some of the kill scenes while giving the audience a feeling that they're the victims. You could feel each stab in your back, every spray of blood splashed onto your face, every creepy unsightly thing on the ground sweeping past your ankles. It made me wonder how much better some horror films could be with a full 4D experience. Breaking down the barrier between sight and touch to make the audience feel an extra layer of terror by feeling what they see. Jason Takes Manhattan would be ripe for an experience like this, with the oceanic setting and the gratuitous kill shots. You could probably match this experience with just about any horror film, but few could match the sensational stabbing from Jason Voorhees' machete.

I don't think I've seen enough Friday the 13th sequels to be a fair judge, but I'll have to say that Jason Takes Manhattan is probably one of the better installments in the series. It carries a unique sense of fun that makes it feel entirely different from what the other films were. It doesn't try to strictly follow the same conventional plot that the original and sequels had while staying true to the blueprint for the slasher formula. There are certainly far more cerebral horror films out there than Friday the 13th, but for what it's worth, this franchise can be a really fun experience. Jason Takes Manhattan is a fresh take for the series, and a delightful new experience.