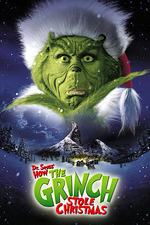 So they wanna get to know me, do they? They want to spend a little "quality time with the Grinch?" I guess I could use a little... Social interaction.

I have been religiously watching Ron Howard's live action adaptation of Dr. Seuss's beloved Christmas story for well over ten years now, typically every year on Thanksgiving night. So this film does hold a particularly special place in my heart, not only for its lifetime memories, but also that it still remains as timelessly funny to me as it did the first time those many years ago. Honestly, if I hadn't watched this so many times growing up, I probably wouldn't like it at all. But that's beside the point now. This adaptation is a staple of my annual ritualistic cinematic traditions, and one I will never feel sorry for watching as much as I have.

Really though, I can understand why so many people would hate it. The film really has no business being good at all- on top of being a live action Dr. Seuss adaptation, it turns the crude factor up to 11, making all kinds of jokes and double entendres that I didn't understand growing up. There's a distinctly "Ron Howard" feeling in this film that I can't really describe well, but at times it feels so schizophrenic, delving into the mad world of its lunatic protagonist while bringing Jim Carrey's own distinct style of humor to the table.

Speaking of Carrey, he does an absolutely fantastic job as the Grinch. This was the only film of his that I watched for a number of years, so I was quite surprised when I saw another film of his without this trademark accent. It was a strange feeling at first, but now I can (obviously) say that there are clearly far better Jim Carrey films out there. But this one will always hold a special place with me as probably my personal favorite Jim Carrey film- it's just far too fun and memorable for me to toss away at this point.

Joining Carrey is a cast of heavy makeup-laden Whoville residents, played by the likes of Jeffrey Tambor, Christine Baranski, Bill Irwin, and many others. I think that Ron Howard may have even slipped in some of his own family members into the cast (correct me if I'm wrong) because I swear some of the characters remind me of him.

How the Grinch Stole Christmas is packed to the brim with memorable quotes that have been passed around in my immediate family for years. Even when it's not Christmas time, we love to toss around the occasional quote, using it to quickly lighten the mood or accommodate a hilarious story. The utter quotability and rewatchability of the entire film is what solidified it as a timeless classic in my household, earning its own place among such other classics as It's a Wonderful Life and White Christmas. It's simply not a complete Christmas season without at least one viewing of this film to me, and my close relationship with it completes my ritualistic annual traditions.

I get why people would hate this movie. Maybe some of you actively avoid it because you're afraid of a live action version ruining the original cartoon (See also: The Cat in the Hat). I completely understand it. Not everyone is going to love this film as I do, and in all honesty, most people may end up hating it. But there's a certain sense of tradition and holiday cheer that this film has carried with it throughout my life, and each time I watch it it almost feels like the first time again. The quotes, the gags (both literal and comical), the ridiculous costumes and hairstyles, the fantastical set designs, the actors- they all form a unified whole that to many seems to be a mess of a film, but to me it is a special and unique tradition that has stayed in my family for years. It provides me with an unspeakable amount of joy and laughs, and frankly, that's really all you need in a comedy, right? If a comedy such as this manages to make me laugh on each watch over the course of more than ten years, wouldn't you say that the film has successfully accomplished its goal? How the Grinch Stole Christmas is a hilarious modern holiday classic in my family, and one that holds a personal affection with me. It may receive some well deserved hate from others, but for me it is a timeless Christmas classic.