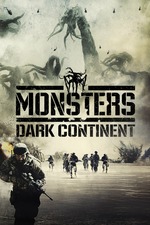 When the world ends and all are escorted to the gates of hell, I imagine that this film will be playing for all eternity. What a mess this film was. Can this even technically count as a Hooptober film? It's not scary, it's just garbage. Either way I don't care, I suffered through two hours of this.

Monsters: Dark Continent has the distinction of being one of the worst films I've ever seen, but even worse than that, it feels like a omelette ripoff of Battle: LA. The producers apparently saw that film and thought they could do better. So how do you make a sequel to a lesser known art house release praised for its deliberately slow moving story and gorgeous visuals? You go in a completely different direction and make a war film, of course. The dialogue is some of the worst I've ever heard, and the acting is equally horrendous. There's basically no plot- it's just a bunch of soldiers globetrotting trying to eradicate aliens (hence the Battle LA ripoff). Nothing that happens makes the slightest bit of sense. For example: two soldiers find two giant creatures mating just a few feet from them. Do they run? No, they just sit back and watch, like agree show. No fear of being eaten or worse killed by these horny monsters. Just sit back and watch two gigantic carnivorous beings shag in the desert. Seems like the sensible thing to do, right?

There are very few films as spectacularly horrible as Monsters: Dark Continent, let alone as unoriginal. The writers didn't even try to conjure up a competent story, and it feels like the director just scrounged up the first takes and threw them all together. To be honest, I wasn't expecting much, but is it too much to ask for an action film to make sense of itself for at least half a second? Definitely one of the worst films of the year, and one of the messiest films I've ever seen.

When Marnie Was There