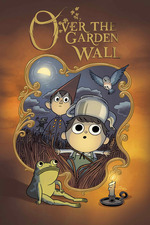 Over the Garden Wall

I was unaware that Cartoon Network shows can also be cinema.

I've been in some kind of slump out of watching movies lately and I've gotten myself lost in the worlds of Adventure Time and Regular Show. I'm kind of trying to get some changes made in my current life situation that created some strange addiction to watching Adventure Time nearly nonstop, like it actually takes me to some safe, happy place that reminds me of a simpler time in my life. I never really thought I would find myself wanting to go back to watching cartoon shows and such, especially since it's particularly difficult for me to get into any TV shows at all, but some shows from CN have really got me hooked at the moment. I had heard a lot of great things about Over the Garden Wall, but I never really knew what it was about. Now I only wish I had seen it sooner, because it's a delicately lovely piece of art that stuns and astounds with its surprisingly simple story.

It's a fairly straightforward adventure story, with each episode of the series putting our two protagonists in some strange predicament or another. Whether it be dealing with anthropomorphic pumpkins or unraveling the mystery behind a shady schoolhouse, each 11 minute segments delivers a bigger piece of a unique journey that ends in an ultimately satisfying finale that practically makes you forget that you're watching a TV show. I don't know what it is that moderns television writers are doing, but it seems to me that the quality of television shows has gone up in recent years, nearly on par with most films nowadays, sometimes even better. If we're in a time when Fargo's TV show adaptation is considered by many to be better than its original cinematic counterpart, that certainly must say a lot about how the quality of original TV programming has drastically changed as of late. Or maybe I'm just not watching enough TV shows to really notice.

Over the Garden Wall boasts an all-star cast, not least of which consists of Elijah Wood and Christopher Lloyd. Many other well-known veteran actors provide their vocal talents in brief cameos in segments of the series, including Tim Curry, John Cleese, and Shirley Jones. The sheer amount of talent that was gathered for even the briefest parts of this miniseries is quite impressive, boasting a wonderful roster of celebrity actors that really give unique feelings to each and every character. Every part of this series brings about a new chapter that is as memorable as the last, creating a truly unique experience that blurs the line between a TV show and a bona fide cinematic experience.

Riddled with fantasy elements, the plot alone is what really makes this series so fantastic. What could be implied as a simple story of two brothers finding their way home turns into a masterful and complexly weaved tale of brotherly love bolstered by a fantastic character development arc. There are plenty of surprises throughout each episode, providing more and more insight into a story that really isn't all as it seems. There's a shroud of mystery that surrounds the story and all of these characters, creating an ominous urge to scarf down each episode in an attempt to fully complete the tale. There are mercifully only ten episodes that run eleven minutes each, so if you have a Hulu account and 100 minutes to spare, this is certainly something that is worth your time (in addition to the many other fantastic Cartoon Network shows).

Over the Garden Wall is proof positive that cartoons aren't really only for kids anymore. And I don't mean the cartoons that appear on Adult Swim every night after 10 PM. I mean the cartoons that are still on at 3 and 4 in the afternoon. What many may pass off as simple children's entertainment is proving to be vastly fascinating to me. Adventure Time has a wonderfully complex backstory to its world and many of its characters that I'm still finding myself lost in unraveling, in addition to it already being an overwhelmingly lovely throwback to childhood innocence. Regular Show is a great and psychedelic acid trip laden with cinematic references that keeps me giddy with satisfaction and enough laughter to keep me smiling. Foster's Home for Imaginary Friends is just a delight that I never could get enough of when I was younger. Over the Garden Wall is like a Lord of the Rings film, but condensed and much more juvenile. It's a spellbinding story of love and companionship that keeps unfolding like a television show should, but retains a cinematic feeling in its overall presentation. It's an ultimately lovely delight that is an unforgettable experience.