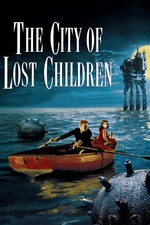 A Gilliamesque French-German-Spanish co-production directed by, Jean-Pierre Jeunet and Marc Caro, set in a surrealistic world where a brilliant, but evil scientist who's gone mad because of his inability to dream, abducts children in order to steal their dreams. Unfortunately all the children are traumatized by their abduction and as a result they all have nightmares. Since the scientist, Krank played by Daniel Emilfork needs ordinary dreams in order to slow down a rapid aging process, he is growing increasingly desperate, but one of the recently abducted kids is the younger stepbrother of a huge circus hunk played by Ron Pearlman and with some help from a streetwise orphan girl, Miette played by Judith Vittet. The circus hunk known as One sets out on a quest, filled with bizarre events, in an attempt to save his brother.

A lot of the credit certainly belongs to the art department and to art director, Marc Caro, who's boldly mixed his own ideas with classic, Jules Verne and Terry Gilliam elements, creating a visually rare and brilliant picture with completely unique dark-settings and camerawork. This type of story development built around very incidental and improbable occurrences more than conscious decisions from the characters is usually not my thing, but in this case I found myself liking the visuals, tone, characters and plot to such a degree that the film became really enjoyable and I consider it to be a great film. I was really impressed at how quickly the tone and story switched back and forth from fairytale-like wonder to dark dystopian science-fiction. I was even more impressed when I found out that Ron Pearlman can't speak French, but just repeated the lines that, Caro, gave him and since his character is not particularly articulate it goes completely unnoticed. Even though I barely speak any French I still consider Judith Vittet's performance as Miette to be the all-time best acting performance by a child. I can certainly see myself revisiting this since the narrative confused me slightly and a second viewing might give a fuller picture.