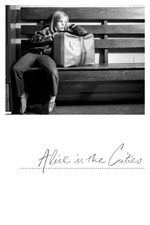 HIPPY GERMAN MOM DITCHES CHILD IN NYC FOR MAN WITH CAMERA TO FLY BACK TO EUROPE WITH CHILD.

What we expect from Wim Wenders is blows, wandering, humane films with sensitive, barely post-pubescent adult men who are generally feckless, passionate and vital women who, for some reason are around them though usually leaving them, and the occasional child who's emotionally the same age as the Man.

And we have most of those elements here in a small, messy, funky Wim Wenders wandering film that later gets considered a "road" film. Halfway through, it's barely covered more than just NYC and has serious issues with a mom ditching her kid with a new stranger to fly home with her through Amsterdam, making me wonder what's German for Children's Services Division, but let that pass.

Two elements Wim develops later are magnificent landscape shots and great music, neither of which occur in this mostly hotel-bound film.