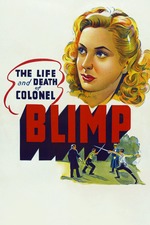 Even though he's a stuffy old Imperialist rich boy--one of the first up against the wall when the revolution comes, as Douglas Adams wrote--I love the old guy.

There's real joy and camaraderie in this film; it's so innocent in some scenes, it could be Disney or a musical: the scene in the beer hall where they battle over music, the duel scene...the little moments of his life that mean so much, especially looked back upon from later.

I'm sure that in my 20s, I might've rolled my eyes at this old geezer. But now in my 60s, I feel a kinship with him, just as I'm told "OK Boomer" online by some Gen Z dork who awaits my demise so he can upbraid my generation's doings.

No one was ever so sumptuous about film color; just seeing how few films of this caliber they were able to make makes that clear. I would've had it that P and P could've gone on making sumptuous films like this well into the 80s. But I guess the world was never meant for folks as beautiful as Blimp.