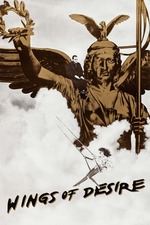 "I grew up in a city that was destroyed, so I loved the landscape and buildings of America where the mountains and rock formations were ancient and the buildings and highways and drive in banks were enormous and brand new. It was very inspiring to a kid from a city that had been destroyed just before I was born. But I knew I would have to go back one day and make a film about my beloved Berlin. And Berlin is surrounded with images of angels. So it was inevitable I guess."

After "Paris, Texas", Wim Wenders owned liberal artistically-focused America--at least Eugene, Oregon, where I lived at the time. His friends and collaborators were great musicians we loved, and in those days before the Internet when all you got was the record or tape and maybe an article on a band or a film maker in "Rolling Stone", for this guy to be so cool with musicians as great as Talking Heads, Nick Cave, and Ry Cooder, but also friends with Sam Shepard was unbelievable.

So this film was beloved before it even hit the art cinemas in town--the Cinema 7 and the Bijou, in an old catholic monastery just off the U of O campus. And in the spiritually eclectic but generally un-Christian Eugene, where we were all reading both mystic religious texts of Buddhism, Taoism, Zen, and Hinduism. But not really the Bible since it was the book of our parents that led to Nixon, Watergate, and the Vietnam War, and since, to us youths, none of those made any damned sense anymore, so we went along with David Byrne and chose to Stop Making Sense.

Into that climate, this film appeared, with a gentle passive peacefully compassionate spirit that was easy to worship: it was gorgeously photographed and had a gentle, affirmative attitude that was the exact opposite of the greedy, capitalistic corporate and warlike attitude of Reagan's Trickle Down standoff with Russia--which seemed likely to blow up the world any day.

Now as I see it, I'm struck by how like Fellini's bare B/W "81/2" the photography is--so pure and clear and luminous, with a quiet, observant quality like Ozu, just watching what's in the frame as it goes on, falling in love with Solveig Dommartin because she was beautful, French, and Wim Wender's GF at the time, but also just lingering and healing the soul a bit in a tough time.

This time through, I'm struck by how eerie the two main angels are with their ridiculous pony tails, which now look as silly as mullets. To my eyes now, 35 years later, neither looks compassionate to this American, and they're almost a tad skeezy and predatory in their lingering gazes.