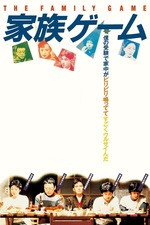 On the surface level this story is quite simple, a Japanese family with two kids, one of the kids is having trouble at school with his low grades and so his parents hire a tutor, and that is indeed what happens here but it’s so much more than that.

A very “flat” shot of the family having dinner with the tutor.
Director Yoshimitsu Morita always starts with the familiar and then shifts and changes it just enough to keep us going, small details are what matters here. The cinematography is rooted in the Japanese tradition, long still takes and a very flat look but again that’s not all, small changes in the shots of the same subject keep everything fresh.
Another important technical aspect is the use of sound, the film doesn’t have any songs but at the same time music plays a role in the narrative, we see characters listening to music but we hear nothing but silence. In a number of scenes the sound is drowned out and completely muted.

On one level this is a social critique of the Japanese society at the time and the role of the family in it, and being a comedy it is also satirical in its critique. On another level this is very much a meta commentary on the medium of cinema and art in general.
The main focus here is the younger brother Shigeyuki (Ichirôta Miyakawa) and his relation to his new tutor Yoshimoto (Yûsaku Matsuda). The coming of this teacher disrupts the order of the family, he’s an outsider and almost an alien, we know nothing of his background except the fact that he has a girlfriend and went to a normal university.

The tutor Yashimoto arriving on a boat, as if from another land.
One cannot help but notice the similarities between this character and that of the protagonist of Pier Paolo Pasolini’s “Teorema (1968)”, in both films the outsider comes and changes something, and in both films this alien-like person introduces an element of eroticism. Yashimoto is often seen breaking the societal rules of the Japanese society, always getting up in the faces of others and shaking everyone’s hand (something rare in Japan).

Yashimoto making Mr. Numata socially and sexually uncomfortable.
Food is also another one of those elements that is there playing a silent role, for most of us lucky ones food is a daily routine and we almost always take it for granted, the same goes for the character of the father Mr. Numata (played by Jûzô Itami, who is also the director of a number of highly acclaimed films such as “Tampopo (1985)” and “Osôshiki (1984)”). Mr. Numata always expects the same breakfast, his eggs the way he likes them, until something small changes in how his wife prepares his eggs and makes him question everything. Again there’s that theme of repetition, of the daily routine down to the smallest detail that we take for granted.
The same phenomenon is seen in the camera movements and in the sound until something changes (e.g. silence when we expect music). This is also an exploration of capitalism in Japan during the 80s and how it affected people turning them into machines.
Such a film is not simply a mirror of society, instead it’s more like The Matrix (1999) where we conduct a simulation, what we see is a simulation of a family, not a real family.

A hockey videogame on TV and a “real” mini hockey game with lights around it resembling a film set.
Mr. Numata goes inside his parked car and starts it without ever moving, Shigeyuki has his miniature games of a rollercoaster and a miniature hockey game, and we have this film. This experiment is the director’s exploration of meaninglessness in life, and each of the characters are involved in that search, the mother questions her role in the household and looks back on the past, the kid’s question their choices of high school, their future careers.
There are countless themes to be explored here, from sexuality to our role toward society and towards each other. The comedy here might feel a bit outdated but other than that this is a masterful film in all other departments, and it is a very important film, it feels like it’s a transitional work taking us from one era to the next. It doesn’t revolutionize the game, or try to reinvent the wheel because it knows that that’s not possible, from time to time a little chaos slips into our daily routine and minutely changes our personal life and the same goes for humanity as a whole. Each day there’s a sunrise and each sunrise is different. While some things change, life always goes on.