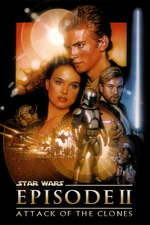 Reasons why Attack of the Clones is the best prequel:

The name alone is pulpy greatness.

It kicks things off with a Bounty Hunter pulling off an assassination attempt on a Senator!

“You wanna buy some Death Sticks?”

Detective Kenobi on a journey through the stars to find an elusive Bounty Hunter.

Kamino is one of the coolest planets in the entire Saga.

Obi-Wan Kenobi vs Jango Fett, round one. I mean come on. To see a Mandalorian hold his own like that against a Jedi? It’s brilliant.

Obi-Wan Kenobi vs Jango Fett, round two. The seismic charges going off as they fight over Geonosis are just the coolest sounding things ever. And we finally get to see the Slave I in action!

Some of the shots of Anakin tracking down the Tusken Raider camp are gorgeous.

Geonosis is another incredibly cool planet.

The Jedi’s assault on the Arena.

Yoda’s arrival with the Clones.

The entire Battle of Geonosis is just so bad ass.

I truly do not care what people think of this movie because I think it’s pulpy perfection. Obi-Wan’s story in this movie is everything I want from Star Wars: A Jedi on a detective mission that takes him across the galaxy, encountering Bounty Hunters and all sorts of creatures. And then it all leads into a massive large scale war. It’s phenomenal. Yeah, there’s some wooden performances and Anakin’s romance with Padme is far from great, but there’s so many other great things to make up for it. A lot of the effects are less than ideal and the overuse of green screen is unfortunate, but it all kind of feeds into that serial kind of tone that inspired these movies. I’ll defend this movie until the day I die.