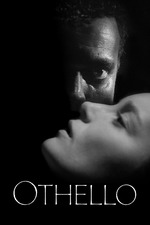 After viewing Orson Welles incredible cinematic vision of "Macbeth" I was excited to see his next film which was yet another adaptation of a Shakespeare classic. Welles "Macbeth" is my favorite of his films so far and as a Shakespeare admirer, is the best film adaptation of the play I've seen; it has stunning visuals, fantastic acting, a brooding tone, and is told in a way that respects the original source material. After watching "Othello" I was kind of disappointed. It was okay, but had a number of technical flaws holding it back including distractedly bad lip-syncing, clumsy editing, and strange arrangements of scenes causing the pacing to go up, down, and just feel awkward with the dialogue at parts.

Let me first say, yes, I am aware of the two different versions. I watched the criterion set containing the 1952 cut which I'm told is the most faithful cut to Welles vision. And I'm aware that Welles had to go through hellish production problems while making this film and took way longer to make then expected, but to me that doesn't excuse the flaws.

"Othello" isn't a bad movie. The original tale still remains and is told dutifully, and Welles striking visuals are present as well and these are enough to hold one during the movie. Where the film falters, however, is in some of it's other details. My biggest complaint is just how bad the lip-syncing was. It was constant throughout and almost every character had moments where their lips didn't line up. The editing was kind of bothersome too. For instance during a conversation scene, with two different camera angles, a shot of one angle would spliced in for one second during the take of the other angle. I understand they're trying to show the other characters reaction while the other is talking, but it's too fast and just comes out clunky. And as for the puzzling arrangements of the scene, they ruined the pacing a bit, but I understand why Welles did it.

This was actually one of my favorite aspects about "Macbeth". Welles took the liberty of switching scenes around, adding, or even cutting a few parts. We don't need Act 1 Scene 2 in which everybody just says how great Macbeth is, they do that the whole rest of the play. We don't have to meet Duncan until later on. Welles was smart when it came to this and adding scenes too. Adding a scene to a Shakespeare play is not something one should try, given how timeless and identifiable his writing is. Any attempt would stick out like a sore thumb. But Welles on the other hand decided to film purely visual scenes with no dialogue. This gave us more time to take in what had happened and be more absorbed in an atmosphere of sorts. With "Othello" Welles attempted to recreate that, but it didn't work out so well. It's as if he didn't have any real reason for doing so, and only wanted to play around with the scenes from how it worked so well before. For instance the opening scene has characters running all over town shouting the dialogue, which is both about Othello and Desdemona, and the oncoming war. None of it feels like it fits together and just isn't cohesive.

As I mentioned above, there are good things about this, like the story, still being respected, and there's some great cinematography. A couple scenes are jaw-dropping as Well as Welles shots of Wells. I will compliment the acting as usual. Welles may not be spot on of how I pictured Othello but he at least... Wait, is he wearing black face? Oh my God, let's not get into that. While Welles was good, he's not exactly how I pictured the character. Othello was almost childlike when it came to his emotions. Loving and loyal like a puppy, but quick to anger and jealousy. Welles portrayal seems a bit smarter and while I believed his character, I feel like the former description of Othello is slightly more effective. Iago is one of my favorite characters from Shakespeare's work. I was always imagined him as a bit more expressive, and almost humorous in his devious delivery, but the Iago in this film was fine.

And 'fine' is probably how I'd describe this movie. It's just as good as the play. It doesn't make a whole lot of attempts at strengthening the classic writing, and when it does it usually doesn't work out so good. As for it's technicality it gets more points for being competently shot, but unfortunately suffers from a few distracting flaws. I know Welles had a greater vision, and that this film was extremely difficult for him in many ways, I understand that. But I can't just excuse all the flaws for that reason. It's like what I said in my "Magnificent Ambersons" review, I don't blame Welles, but I can't just ignore the flaws because of some external force that effected a huge problem in the movie. I'm not critiquing how much Welles wanted to make this or how much effort he put in, I'm critiquing the final project and how that effort payed off. I'm not going to recommend the original vision, I'm recommending the vision we got. And if an artist really cared about making great films, they would take my words constructively and learn from their mistakes.

In short I think you should see this. Some actually prefer this to "Macbeth" which is something I clearly don't agree with, but maybe you'll find it more enjoyable than I did.Heavily flawed, but it's at least worth a look.