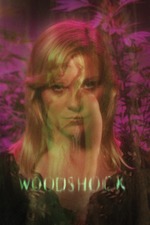 "Woodshock" was a movie I was kind of anticipating. The trailer looked interesting, I love these kind of trippy, dreamlike, indie movies, and is yet another film from the famed A24 studios. A few days before I watched it I saw a negative review of the film amongst what very little attention the film got anyway. I thought to myself "Oh, man does it suck?" Nevertheless I watched it anyway and was a little disappointed. This isn't a movie I was passionately excited for, but I was hoping it would be a little underrated gem in the indie circuit.

Now I find it hard to hate this movie. Despite it's flaws I think it has some technical marvels that shine through. The film looks beautiful and is well shot. The hallucinogenic scenes are precisely edited and feel transcendental. For someone who will throw themselves onto any artsy indie film in this style (like me) I feel like you'll probably enjoy these segments. Where the movie falters, however, is pretty much everything else in our story of the real world. When the film documents Theresa's sober life, every feeling you get from the drug scenes just grind to a screeching halt and it becomes just plain boring!

Not to mention these scenes are so poorly communicated, that you have no idea what's going on as well. I read the synopsis, and found that there was a couple things going on that I didn't pick up on. I watched a couple scenes again to make sure I didn't miss anything, but no, the film was just so poorly written that none of it was communicated. (slight spoilers) For Instance I guess the weed was poisoned...? I got that she was mixing some stuff in that seemed harmful, but I found literally no evidence that characters were trying to kill themselves with it. When the old man returns and says that there's something wrong with it, I thought he had grabbed the bad stuff, and that there was actually something wrong with it. But what really happened is he grabbed some good stuff and it didn't kill him like he wanted it too, so there's something wrong with it. Or take this scene for instance. Apparently, they suspect that the old man, got his weed mixed up with a boy who died supposedly from a dose. But during the scene where Theresa's boss tells him the news all he says is "What did you do?" That's it. I watched this scene twice, never, not once do they ask "Did you mix up there orders?" There wasn't a scene before where we see Theresa hand him the wrong stuff, or if there was they didn't do a good job of showing it. It's just "What did you do?" and that means that the old man and the boy mixed up their weed. We're supposed to get all of that from "What did you do?"

The rest of the film is pretty formulaic. Kirsten Dunst wanders around her house, she gets high in the woods, repeat. What makes these scenes even more boring is how little defined Theresa's character is. On the surface she seems interesting. She's lonely, bored, and on the brink of self-destruction herself, but I had a hard time understanding her thought process. She'll do normal things, then she'll do weird things and I never knew what I was supposed to gain from all this? Especially from the ending. Things escalate badly in the real world, and just when everything crashes down, the final scene is her getting high in the woods again, and then floating up in the air as if she's free.

I'm pretty sure her ascending into the treetops represent her dying, but what does this add? What does it say about the character, and the statement the film is trying to make? I honestly don't know what this film is trying to accomplish. Are you glorifying addiction? Or are you dramatizing and showing the negative effects of it. Is it tragic, seeing her lost in this haze? Or is it happy that she's escaped from her awful reality... which wasn't really that awful to begin with. All the horrible things were caused by you. So what do I learn from this? All the drug scenes are really beautiful? Is this the message? Wow, being an addict looks awesome! I'm going to smoke some hard, poison, weed! It doesn't glorify it in a sick, self-aware, way like "Trainspotting". Instead it seems unaware and lost in it's own artistic endeavors.

After first watching I thought the biggest issue was the pacing, and while that aspect is part of the problem, the issues can be summed up in 'unclear intention'. I had no idea what was going on, not enough information was given to me to follow, or be invested in the story, or even know what the point of this film was. It just needed to make more information clear. And don't get me wrong, I don't want a film spoon-feeding me everything, I love subtle gestures, but with "Woodshock" the gestures aren't even there. There's nothing! Perhaps I'm being too kind to this film, but taking all the technical achievements into account, I don't think this film is that bad. It's not enough to save the film or add any substance to the movie, but I felt like it made the experience a little more worth the while. If you guys are easily swayed by Malick-esque indie crap (like me) then you may enjoy the visceral scenes, but other than that, "Woodshock" will just leave you feeling empty.