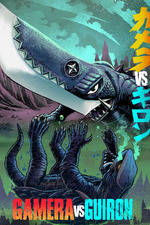 PAIN! Without love
PAIN! Can’t get enough
PAIN! I like it rough
Cause I’d rather feel pain that nothing at allllllllll-al.
-Three Days Grace

Aside from his affection for children and having a shell, one of the biggest differences between Gamera and Godzilla is that Gamera gets the shit kicked out of him. Obviously Godzilla has taken his fair share of lumps, but a large part of the Gamera series is seeing our turtle hero stabbed, burned, frozen, and bleed. As such, while Gyaos is his archenemy, his most representative foe might be Guiron, who is basically a knife with legs.

Unlike Gamera’s other two extraterrestrial foes in the Showa series, Guiron follows the Godzilla series standard of being a servant of an alien race. However, as the alien planet is a twin of Earth (a common idea in this era; a British movie released the same year, Journey to the Far Side of the Sun, is based on this, and it also figures into the origin of the Cybermen in Doctor Who), Guiron, being the protector of the humanoid race against other monsters, is essentially Gamera’s double. Although goofy, the fighting can get brutal at times, such as when Guiron embeds two shuriken below Gamera’s eyes.

The plot is like a space age update of a fairy tale, with two young boys lured away from home by women who feed them spiked food and plan to eat them. That the woman are young and attractive instead of old hags may have given a lot of kids watching this weird feelings. We even have an evil mother figure, in the bitchy mom of the American kid.

It’s also interesting that this is relatively low stakes, with two boys being in peril rather than the world. Gamera fights to save them anyway, a nice demonstration of his compassion. He’s definitely cooler than some woodsman.