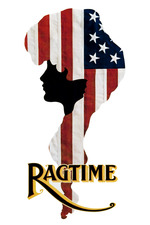 I pride myself on my strong memory, which told me that it was roughly a year and nine months since I had read E. L. Doctorow's novel Ragtime. A postmodern work of historical fiction, it is composed of intertwining storylines concerning families from different ethnic backgrounds, interspersed with fact-based anecdotes about the likes of J. P. Morgan, William Howard Taft, Emma Goldman and Harry Houdini, as well as the infamous Evelyn Nesbit scandal. Needless to say, I absolutely loved it.

Were my expectations for this 1981 adaptation met? Yes. Were those expectations high? Not massively, but only because the book is so damn good. I'd known about the film before reading the book, but when I read it it struck me as seemingly impossible to film because of its sprawling scope and because it literally groans with detail. I thought there was no way any filmmaker, not even Miloš Forman, would be able to top Doctorow's work, least of all by compressing it into a film as short as 155 minutes. But, all things considered, and notwithstanding the film's limitations, Forman, producer Dino De Laurentiis and screenwriter Michael Weller have done a fine job.

Armed with a budget of $32 million, the filmmakers clearly spared no expense on production value, and the film is all the better for it - it's clear evidence of a valiant attempt on the filmmakers' parts to capture the spirit of Doctorow's writing, and the book's immaculate sense of time and place was adequately matched on screen and on the soundtrack, the latter thanks to Randy Newman's grandly sweeping music. The fantastic cast is also a major blessing: alongside veterans like James Cagney (in his last major screen role) and Donald O'Connor are younger stars and newcomers like Mandy Patinkin, Mary Steenburgen, Elizabeth McGovern and Howard Rollins (who provides the film with some of its most powerful moments). Jeff Daniels and Samuel L. Jackson have brief but notworthy performances.

Ultimately, though, the film falls short of replicating what made the source material so sublime. The whole point of the novel was to create this vast, breathtakingly ornate tapestry of turn-of-the-century America and all of the people who were instrumental in defining the country at that time - the celebrities, the complacent and well-off, and the oppressed minorities and immigrants. The film, in focusing heavily on one particular strand, is far less even-handed than the book, and therefore less impressive. Also, Doctorow made the inspired choice of using indirect speech to give a rough idea of how the characters would have talked, but Weller mistakes this for actual dialogue, with the outcome being that much of his script feels on-the-nose. I'd have liked to see a Robert Altman-directed version, as he would have deftly handled the intertwining plot strands and thus kept true to Doctorow's intentions.

I wasn't surprised to find that this film failed to make a profit on its original release, as it was released about the same time as Heaven's Gate, when ambitious and expensive projects were on the way out (though it did get eight Oscar nominations). I, an acolyte of the novel, can only see that that was just. However, seen for what it is - a majestic and evocative period piece - it may be that Ragtime deserves a wider audience.