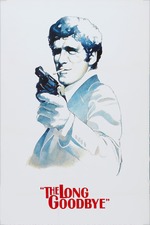 Robert Altman’s The Long Goodbye is one of the director’s most dreamlike, disorientating works. Adapted from a novel by Raymond Chandler, it tells a twisty, complicated story about murder and betrayal, but the irony is that, despite the fact that it’s largely comprehensible in and of itself, it has the misfortune of being in a Robert Altman film, which, like all of his films, isn’t particularly interested in its own plot. Instead, it uses its genre framework as a pretext to ask something interesting: what if a private eye straight out of classic Hollywood were transplanted to an era in which he’s no longer relevant?

The film opens with a scene invented for the film: Philip Marlowe (Elliott Gould), Chandler’s revered literary creation, is asleep in his clothes when, at around 3 a.m., he’s woken by his hungry cat. He’s out of cat food, and the pet won’t settle for anything other than its favourite brand, so Marlowe drives to the supermarket to find it. The supermarket is also out of it, so he buys a different brand in the hope of fooling the cat. His plan goes awry, and the cat walks out on him. This episode serves two functions: one is as a miniature version of the main plot, which undoubtedly renders its inclusion clever (the story is built around Marlowe’s loyalty to a friend who ends up taking advantage of him); however, perhaps the more important task it fulfils is that of establishing character. What this sequence tells us about Marlowe is key: he’s not the self-possessed, laconic man of action Howard Hawks gave us in The Big Sleep, but a dopey, garrulous stooge beholden to a personal style twenty years out of date.

It struck me watching the film that if the filmmakers had chosen to costume Marlowe in a succession of colourful, stylish outfits instead of the same dark suit, white shirt and tie, it would have been a completely different, and most likely lesser, film. It’s vital that he dress in a way that sets him apart from his surroundings, because it reflects the way in which the 1970s - the “me decade” - has no room for his chivalrous ideals and snarky wisecracks. He may be hapless, but there’s no denying that he’s driven by strong notions of right and wrong, and that he has more than a few witty barbs up his sleeve; the problem with this is that these qualities are completely lost on a society littered with expensive health farms, hippie cocktail parties in Malibu beach houses, scantily-clad women doing yoga and getting high, and lingering scraps of social unrest left over from the previous decade. Marlowe is, to put it bluntly, a relic.

It’s this dislocation that helps explain some of Altman’s creative choices. He’s known for his use of zooms and pans to single out individual aspects of a bustling crowd scene, but The Long Goodbye is a rarity among his films in that the camera is literally always moving (the only other Altman film I can remember where this is the case is Gosford Park, and there the constant motion served an entirely different purpose). Film noir is known for its creation of a certain type of visual atmosphere, one dominated by chiaroscuro and bold, line-heavy compositions. What it isn’t so well-known for is loose, freewheeling tableaux of incessant movement and noise - that is to say, Altman’s signature style. Merely by shooting in widescreen in broad daylight (courtesy of the great Vilmos Zsigmond) and allowing the characters to ramble their way through interactions, Altman is upending the central tenets of the genre in which he’s working, and it’s exciting to watch. But he goes above and beyond: as they did on McCabe & Mrs Miller, he and Zsigmond flash-exposed the film stock to give the film a washed-out, hazy feel, and coupled with the fluidity of the camera it suggests that what we’re watching might well be a dream for all it makes sense to have this protagonist in those surroundings.

It would be wrong of me to give Altman all the credit for why the film works. Just as important is screenwriter Leigh Brackett, who was herself a veteran of classic noir (she co-wrote Hawks’s The Big Sleep). It might be difficult to fully separate her contributions from Altman’s (and the cast’s), but the film’s brutal ending, in which Marlowe turns from a wandering adventurer, noble in his own silly way, to an angry zealot violently pushing against the narcissistic culture of the ‘70s, was her creation entirely. Plus, I find it difficult to believe that the brilliant line “That’s someone I love, and you I don’t even like” (spoken by Mark Rydell, channelling Lee Marvin in The Big Heat) can have been improvised. Speaking of which, the cast is absolutely perfect, and not necessarily because all the actors give great performances: Gould is of course brilliant as a Marlowe held at a remove from his surroundings, but the filling of other important roles by minor celebrities (socialite Nina van Pallandt, baseball player Jim Bouton, film director Rydell) is an extension of the film’s comment on Hollywood self-obsession.

By revelling in the dissonance of its premise, The Long Goodbye stands as an oddly poignant examination of the shifting significance of pop iconography: we might like to think that culture has immortalised figures like Humphrey Bogart, but there’ll always be something that makes them seem weird and possibly ridiculous to future generations.

Added to The Canon According to Albie