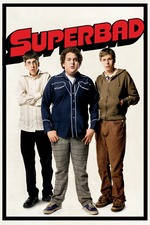 “Prepare to be fucked by the long dick of the law!”

The Good:
Superbad is so incredibly quotable I genuinely had a difficult time choosing the the quote for this review. Despite my Letterboxd “logged” this was my eighth time watching this. It’s a testament to how re-watchable Superbad is.

Rogen & Goldberg started writing this 2007 comedy in high school, and it shows! The dialogue is so realistic and effortlessly funny. Despite it being 10 years old, Superbad doesn’t seem to age. As a high schooler I can account that the dialogue is 100% accurate.

The music in Superbad is incredibly versatile and timeless. Rather than using generic early 2000’s music, they did something different. They choose this 70’s funk that fits the tone so well. It also helps the film stay timeless.

Due to the actors being so young, the performances are incredibly slicks day realistic. The chemistry also always works.

The Bad:
With almost every raunchy comedy you can expect a below average plot. While, the story is interesting, it leaves much to be desired.

While, there are some interesting and well done shots, the direction is quite lackluster.

Fun Fact:
Michael Cera's mother actually read the script before he did, and she was the one who convinced him to try out for the part.