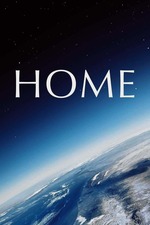 Home is a 2009 documentary written by Isabelle Delannoy. The film is directed by Yann Arthus-Bertrand and narrated by actress Glenn Close. Shown through a string of slow, extremely wide aerial views that are simply breathtaking, this film describes how man is disrupting the ecological balance of the world through industrialization and megalopolis's like New York and Dubai, a city light-years removed from nature—and yet completely dependent on it.

This documentary reminds me a lot of Koyaanisqaatsi except for the fact that Koyaanisqaatsi’s narrative is its amazing score by Phillip Glass. Home, in some ways, is better. The film's theme and overall message is that human overpopulation is sucking the life out of the planet . In order to survive as a species and as a planet, humans have to find balance within ourselves and our environment.

This is a beautiful film to watch. The camera work is excellent and Close’s narration is colorful, subdued, and often poetic. This is a great film to experience alone, on a date, or with your family. The only downside was the fact that there aren't any extras. However, if you would like to see the impact our existence has on the planet and ultimately our survival, this movie will supply you with a lot to ponder on.  You can probably find this film in any of the local libraries or you can buy it off Amazon. It is a worthy addition to any movie collection.