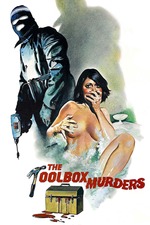 I've meant to watch The Toolbox Murders again for a while but haven't had the chance to do so. I know Blue Underground has a 4K UHD release of this film, but I'm short on cash right now. I chose to watch it on Tubi because it was a less expensive option. I'm glad I watched it again after all these years. In my opinion, The Toolbox Murders is a good horror film. This film's dark, gritty, and sleazy atmosphere are my favorite things about The Toolbox Murders. I really like how the movie starts with the main villain driving late at night in his car. It contributes to the film's dark, melancholy tone. I can see why Stephen King finds this film frightening because the main villain walks right into people's homes with their doors unlocked. The idea of anyone being able to walk into your house late at night scares me. Gary Graver's (Always) cinematography is great, and I love how he captures the dark tone of Los Angeles.

The violence is handled exceptionally well. Blood and gore abound in the film, which looks and feels disturbing. By today's standards, the graphic killings are still brutal. Some scenes in this film still make my skin crawl. This is not a film for the squeamish. The story keeps you guessing about what the main villain will do next and how he will be apprehended. Although some acting and dialogue aren't great, Cameron Mitchell (Blood and Black Lace) as the main villain is fantastic. His character is so disturbing and creepy with him trying to kidnap women in the hopes of having a replacement daughter. The scene with him talking to a young woman chained up in the bed is a scene that I will never forget for how unsettling it is.

There are a few minor scenes in The Toolbox Murders that don't always add up. Kent (played Wesley Eure) decided to burn his best friend alive to cover up his uncle's murders. Soon after, he killed his uncle for going too far by chaining a woman on the bed. You were fine with him murdering other women, but now you're not? The incestuous relationship stuff appeared out of nowhere and was unnecessary in the film. On the plus side, the movie looks stunning in HD, and I'm sure it'll look even better in 4K UHD. I intend to purchase the 4K UHD release as soon as possible.

Overall, The Toolbox Murders is a solid horror film that is well worth seeing. Rating: 8/10