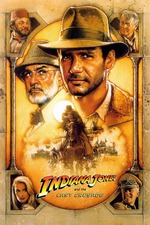 I have a weird relationship with Indiana Jones. When I was younger I loved it, I had a hat, I had so much lego, I played the games. But for some reason, I never really watched the films. I watched Temple of Doom a lot, even though it frightened me a lot. The other two, not so much. Which is really weird, taking into account the influence the character has had on me.

Anyway, on to the film.

I really liked it! There is a spectacular handle on tone. This film is so funny, it's almost a comedy. Yet all the action feels real, the stakes are high, it really feels like Indy could be killed. He gets beaten up most of the film, he gets through by luck, the occasional good punch, and knowledge.

It can feel a bit too quick at times if I'm being honest. It's a very efficient film, but sometimes I want the film to spend a little longer in each scene, have longer conversations, don't race all the time to finish the scene in as few words as possible.

I wish this wasn't the "last" Indy film. There were original drafts involving a haunted house and I wish we'd seen more of Indy in not deserts. Swamps, haunted houses, places like that. I think I just want more of these, it would feel appropriate to the pulpy tone if these had been made all through the 90s.