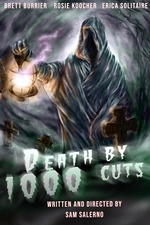 A largely incoherent microbudget streaming project. These always seem to have an annoying douchebro lead in them. Combine that with the film's opening scene, in which said bro, who looks to be in his early 30s, has a "you're not the boss of me" argument with his parents, and you've got a main character who you're not invested in at all.

Not that would have helped much anyway, since his actions make no sense from moment to moment, going from Scooby-Doo fear of everything to wandering into a murder house and filming body parts with a camcorder while making goofy quips in the background. They found this really really big dude to play one of the eerie monsters, which could have been intimidating if he didn't have a comical expression on his face the whole time.

Do you have a deep-seated phobia of Hobby Lobby art masks? Hopefully you do, because otherwise there's not a lot in the scare department here. The acting is brutal, even by microbudget standards, and the script makes little sense, to the point that it becomes harder and harder to care about what's happening the further this goes. And for a film with this budget, they probably should have leaned a little less heavily on the cheap effects.