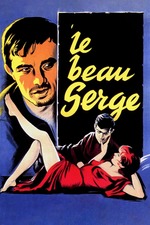 The saying traditionally goes “you can’t go home again.” Really it ought to be “don’t go home again.” There’s an unmistakeable scent of infantilism that goes along with rummaging around in one’s own imagined past, and the most pathetic version of all is bumming around your old home town after you’ve supposedly moved on. Chabrol, you magnificent bastard, I read your book.

You figure out a couple things pretty early on here. The title isn’t poking fun at Serge (Gerard Blain), an obnoxious drunk that’s remained in place up until the time of the story. And Francois (Jean-Claude Brialy) is a real asshole. It’s through Francois that Chabrol skewers every corny vision of the rustic countryside. The city boy has made good and wishes to improve the lot of his ancestral village, starting with Serge, his pet project. This being a dumbass college kid, Francois sets to work by generally alienating Serge and his wife with his unwanted advice, and it all ends up being a way to get into the pants of Marie (Bernadette Lafont) anyway.

I could see a certain person being surprised as Francois, presented as a good-hearted charmer who finds himself a local little layover love affair, is shown to be more and more feckless, naive in his view of the world and wrapped up in stupid reminiscences of a past that never was. The clean-cut Francois cuts a dashing figure in the outset only to look like a goober the further things go along, which is familiar enough. We’ve all known that asshole. “I’m trying to help.” Bah. Francois stirs up hornets nests involving alcoholism and incest and seems shocked every time, not having observed much of human nature and what happens when people are mired together with no future.

The ancients had it right in a lot of ways. Don’t look back Orpheus, but of course you will, you hollow headed dandy. Everyone seems baffled that Francois, having attained an existence that might as well be on the moon for these people, has come back, but bafflement turns to annoyance once it becomes clear that he’s essentially a younger version of the frustrated town priest that no one listens to. When you make it out of the madhouse, don’t go back in, man.

A Gallic slap in the face to the stodgy sentimentality
of a passing age. If this is the beginning of the French New Wave as the wise old scholars say, you could definitely do worse than to kick things off with the closing imagery here. A drunk, bare comprehending Serge, pulled in from the snow to witness the birth of a living child, his laughter tinged with bitter regret as a horrorshow flavored score swells in the background. A time of celebration as another one is born into dust. Neat.