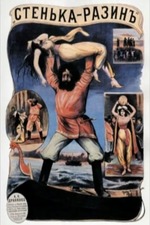 Early Russian narrative piece about Cossack folk hero Stenka Razin. I'm a little surprised that Vladimir Romashkov was able to make a film about a pretty subversive figure in the midst of the Romanov dynasty's ongoing clampdown on dissent in the era. Nonetheless, the story is apolitical, and most of the footage is of dudes partying, first in boats on the Volga, and then in the forest.

Not much of note in this one other than historical significance. It's one of the first narrative pieces of Russian cinema, and it features a very early use of title cards, which is helpful to understanding a convoluted plot hatched by schemers that results in a woman being thrown in a river.