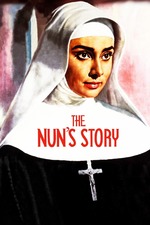 Me: Thus saith the Lord: take a chill pill.

Gabrielle/Sister Luke: //looks around, hesitant to speak during the Grand Silence but is disturbed by my presence coming out of nowhere// Who are you?

Me: I'm you but as a non-monastic Protestant layperson with less theological insecurities from my teenage years.

This film...I did not expect to relate so hard to this character. This whole movie is basically Christianity if it were based on works rather than grace through faith to ease the pain of one's imperfections knowing that Christ has paid it all. Yet, it is a great topic to explore for the laity, monastics, & the clergy alike. The idea of achieving perfection seems almost impossible for most Christians unless you come from a very charismatic tradition (not pointing out Pentecostals but I'm more so thinking of the unusual Methodist Holiness testimonies from the 1800s). What is so intriguing to me is that Sister Luke had never realized how becoming a nun gave her less freedom to love herself & her neighbors well because she looked at her (and sometimes her neighbors') faults rather than God's grace & mercy to change herself. That in itself can destroy anyone's faith. I think that's why the Bible itself also proclaims that doing things in love gives you a kind of freedom without any worry of breaking any law against God or others (I think it's in a Pauline letter...possibly one of the Corinthian ones or to Galatia, but I'm a little lazy to check for now).