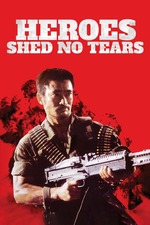 There is only one reason why anyone would choose to watch this film. It is directed by John Woo.

This is not a good enough reason.

The film is terrible from start to finish, with no redeeming features whatsoever. Nothing makes sense. Scenes happen and stop happening and lurch to the next without anything resembling a visible or logical transition. The tone is all over the shop, from drama, to something resembling comedy, to tragedy and what would now be called torture-porn.

The action scenes are one-note and static. A shoots at B, one of them dies. Replace the dead one and repeat a few times until finished. There's no actual action choreography so to speak of, and certainly no sign of anything resembling the balletic action scenes Woo is so famous for.

I thought First Blood: Part II would be the most ludicrous war film I watched this year. Heroes Sheds No Tears beats it by some margin.

I wasted my time watching this. You shouldn't.