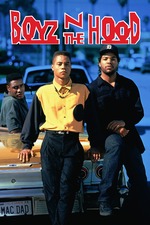 This feels a bit like one of those lightning-in-a-bottle movies, the kind of shocking power it's impossible to recreate. Boyz marks the debuts of John Singleton (still the youngest director ever nominated for an Academy Award) and Cuba Gooding Jr. It's an urgent, totally authentic film that shines a spotlight on one of America's least filmed places.

It takes a lomg time for a plot to materialize. For much of the film, we are quiet observers of these people's lives. Under the mask of normality, there runs a fear through the film, and often in the background we canhear gunshots and roving helicopters.

So mamy powerful moments. Tre's dad explaining gentrification. The descent into hell when Tre and Ricky get back from buying cornmeal. And the powerful line: "They either don't know, don't show, or don't care what's going on in the hood."